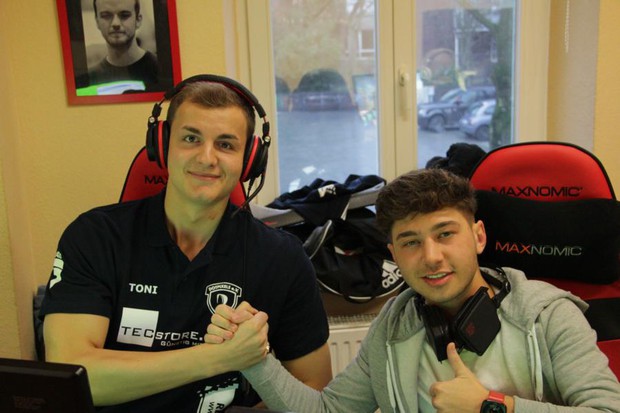 so we just upset by qualifying for the ESL One offline qualifier in Katowice on February 14-15 which makes us very happy and which is a huge success for us already, and I want to thank everyone on the scene who already had good words for us for delivering a good performance in this qualifier.

Unfortunately we are not the most loved or famous players in the scene right now which is a result of the supposed match-fixing we wrongfully got accused with, and the currently ongoing match-fixing scandals overall right now, when we were named myRevenge for a very short time quite a month ago.

Therefore I want to make this statement to clarify the situation to hopefully put an end to the ongoing ****storm on twitter from lurppis & co. which I personally find sad and evil at the same time. We were and still are blamed to have thrown a showmatch on csgolounge back then versus the hungarian team volgare in a bo3 to make profit out of skins.

As there was no seriousness and only absurd threats by myRevenge itself to sue us for throwing, I didn't feel to make a statement until now where our deserved offline qualification in Katowice is in danger.

First of all I want to make clear that we DID NOT lose the showmatch on purpose to win skins and I want to highly emphasize, that no single player from our current team nor our lineup in myRevenge back then did place ANY BET from his steamaccount nor from secondary accounts which is proven. I ask Valve to review this issue so my statement gets confirmed.

Regarding to the accusation that original players from our team did place max bets on volgare it turns out wrong, as only the player ayken who played only a very few stand-ins for us and was not longer part of the team during the 'betting scandal' anymore made a high bet on volgare.

I want to point out that we are temperemental guys who are easy to tilt on matches where nothing is on the line, so we took the showmatch not seriously enough and for example myself ended up trying knifing people and taser people ingame which is fun but has nothing to do with professional gaming. In regard to this I want to point out, that I think everybody should realize that nobody would be that dumb and throw a match like this in a hilarious way while being involved in a serious match-fixing.

We didn't realize that our kind of sloppy play would bring us in such a bad position like now and I definetely wouldn't take it that easy anymore again as it raises responsibility for us players to save people's skins which we weren't aware of in that time. We just didn't care about this match and wanted to make fun in front of a couple of thousand people which was really stupid as it turns out now.

Furthermore we didn't raise any serious damage in form of skins or anything as csgolounge was so sceptical about our performance, that they just deleted our match from their site. To bring it back to volgare who played well against us, they are also definetely not a bad team as they just attended ASUS ROG Winter 2015 by defeating the current Copenhagen Wolves in a bo3 qualifier and AliGon pretty easy as well.

My current teammates and me always played mostly for fun and didn't care too much about showmatches like this which brought us in trouble now for not performing well. The current situation is that tahsiN and me just played the german EPS Finals and the Acer A-Split Invitational @ TakeTV and we found out that we can have pretty much success competing professionally.

With r0bs3n, who already played the playoffs on a major and the talents am0 and oskar a team is created now, which can do damage on a international level I believe and which is fun to play in.

My teammates and me would be highly depressed to hand a serious ban by valve and a disqualification for the EMS Katowice offline qualifier since we are completely innocent and it is a little dream for us to play there.

To answer the shouts that we are greedy scammers, tahsiN and me play with standard skins, just to point out that we absolutely don't care about skins. I find it very sad, that younger unknown teams or newcomers who work up upsets on bigger teams get stomped to the ground like this just because of this screwed up major discussion of throwing matches on csgolounge. According to the slogan 'they are scammers/throwers or cheaters or both'.

Thanks a lot for the ones who read my statement and I hope there will not be a wrongful punishment in the upcoming days.