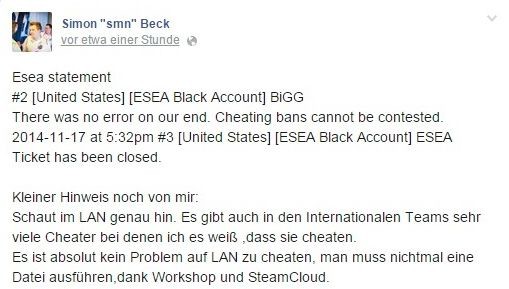 Alot of rumours these days regarding players using cheats. smn first, kqly next, and sadly for the scene there will be more - alot more :/

The question thou is - will Valve have the balls to ban all the "cheaters" prior to Dreamhack? If so, the tournament will be a bit weird :P

Everyone asking for names. Why would I officially go out and accuse someone of cheating without proof? Wait and see instead. Just as I will.

We independently banned a high profile cheater, a german player, then worked with valve and shared our specific technique so that more pro players would get banned

the results are starting to roll out with vac bans tonight, more to come soon.

My current alias is seizune but my true alias is Rizla. I've been involved in the cheating scene for quite some time. I've used many cheats, some more reputable than others. I've also learned quite a ton of rumors and facts about the scene and the people surrounding it.

Two years ago, and as soon as Organner.pl was hit, I was after a cheat. forsakeN, another moderator, posted a small video of him and his friend cheating on ESL and claiming that's how this game should be played. I checked that demo out, it was fascinating. A wonderful cheat on every possible aspect and it supposedly supported all anti-cheats. I thought it was time for me to get it.

So, I contacted forsakeN, asking him to redirect me to that coder. I had it all figured out. My account is a solid four digit with a ton of games and a good amount of reputation. All I needed was the software to allow me to reach the top. Organner wouldn't cut it.

Weiterlesen
forsakeN responded to me, saying that the coder doesn't sell to people that he doesn't personally know. I thought I'd investigate a bit more. There was a friend at the time in Organner.pl forum under the alias jbx, who also had a two digit ID by STEAM_0:0:25 and the alias jxtn. In a discussion I had with him, he mentioned that a good friend of his was cheating in leagues for ages. I asked who that was, his reply pointed out at sF, who also had a two digit account by 0:0:18. I told jxtn to ask sF which cheat he used. His reply made us burst into laughters, because sF was using the exact same cheat I was after. Weird coincidence, right?

Later on, I contacted supex0 myself in high-minded.net forum for a slot in his cheat. The response I got annoyed me, because I knew both him and forsakeN, being good friends, were deliberately denying me. Unfortunately, nobody denies me, so we had a bit of a problem there. I urged supex0 to reconsider and that I would follow his instructions on how-to use the cheat and how-to make sure the cheat doesn't get leaked. An example was that I was under a 32-bit OS at the time with Organner's Immunity and that would be an issue. I agreed to go on a 64-bit OS. After couple messages, I realized he was never going to sell the cheat to me. And the reason behind it was forsakeN. So, I thought, let me show you what I do with people that piss me off.

For the next few days, I watched closely on anything that would point me out to supex0's real account or his customers. I already knew certain people who were using it inside high-minded.net. I started playing with couple Germans and getting to know them, one of them was Crownt. Also a coder and former customer of supex0. Slowly but steadily, I was in their circle and managed to phish some information, such as supex0's paypal account information and also his main steam account by 0:1:17, the one now being banned. Game was on.

I promised I wouldn't let him in peace until he would apologize to me and/or sell me his cheat. Funny thing was, I never intended to harm him in any way. Yet, he insisted. Later on, I realized I had to follow a different approach to it, tracking down his customers was not enough. I had to get this cheat exposed so much that it would be eventually targeted and detected. And so, here we go.

First, I targeted few morons in ESEA, jbree team, who were using high-minded cheat at the time. They were doing well, despite Locher being blatant, these were the perfect candidates. I contacted a naive player from the enemy team on ESEA's Intermediate season semi-finals, who had just been smashed by jbree, telling him my story about supex0, his cheat and so on. Immediately, the guy spoke to pretty much everyone about it, in Reddit, in HLTV, in ESEA. Unfortunately, I was banned for malicious activity by lpkane for making this fuss, which is fine because that hillbilly has banned me over 15 times for it.

After that, HLTV.org and pretty much every other forum was my target to talk about sF (who was my main bridge to talk about supex0), the cheat etc. I also included names like Pyth and Jw, whose in-game behavior matched the one I'd seen with people using that cheat. Didn't matter if I was right or wrong. The point was to find enough possible candidates and support the belief that this cheat was everywhere. After a while, I started harassing sF in ESL and got banned for account theft (which I have no fucking clue how it happened but anyways). Shortly after KQLY saw my post, he messaged me asking about what cheat I was talking about. I informed him of it and checked him on my list of future victims.

After long efforts and pissing many people off, people like ko1n, supex0's hack was leaked and detected in ESL. I will not post the actual link here but feel free to google this: "kifferking supex0 baking bread" and enter kifferking's site where there is a download link. It contains settings, source code and anything else, the cheat itself doesn't work obviously. Certain people faced bans, people like recell and cLy. supex0 claimed to be inactive and that was it. During that time, Wmb also was talking shit after I told him about it but, we won't pay attention to him in this blog. Moving on.

Wmb, being dumb, trusted that supex0 went inactive. I, on the other hand, didn't. Crownt also urged me to believe it but, I never did. Watched closely few professional players and was monitoring the scene in general. Olofmeister, krimz, Jw, schneider, Kirby, asmo, these guys were possible candidates. supex0 also had a triggerbot series that he also sold and more projects. He claimed in Hackforums.net few times that he was detected everywhere. He's a respectable coder in every way but, that shit wouldn't fool me.

Few months later, KQLY and sF were cheating and I was aware of it. I automatically knew that he was doing business again and tried to awake the HLTV community with couple posts. Unfortunately, the average HLTV user is so naive and ignorant that it's impossible to convince him even with a VAC ban, because he will think the ban is false or the account is not of the player himself. Recently and after doing a lot of work, I sent a few messages to certain people via another person on certain individuals, after jbree team and few others were about to play on ESEA. The results came back positive. All I have to do now is watch the bans roll in.

Much of the things written here is only known to a small group of individuals and it doesn't matter for further proof to be posted. Besides, we have to keep some things for ourselves, don't we.

You can find all my ESEA aliases if you search closely, basically every Greek player banned for malicious activity on ESEA is me. A brief search through my posts will be sufficient to convince you of my words' validity. Tormenting sF for money as if I was a pirate was also fun to do: http://gyazo.com/69e64a027994927e87767d76fa1f7afd

Posting supex0's old cheat's source code on high-minded and getting banned for it was also fun: http://pastebin.com/JjvXceLu after that tool ko1n did exactly what he should have done. You know, German coders are really funny all you gotta do is piss them off a bit with someone else's work being better than theirs. Then they instantly go crack the other guy's cheat, it's fascinating.

I'd like to point out that I'm quitting this scene today as my job here is done. I invested more time in trying to bring supex0 down than playing this game. I guess we all have our bad sides.

I'd like to thank supex0 for being such a brilliant individual and not listening to my warnings. He enjoys his two digit VAC ban and the VAC bans of many more professional players since 2006 and his CoconuT hack because he thought I'm not up to the challenge. He should also enjoy reaching 1000 games from bundles that he can still play and be proud of.

I'd like to thank WMb, for being a good dog and doing what he should have done.

I'd like to thank Organner, who bought Uall's source code for 30000$ making claims about insane coding skills and he's dead for 400 days, which made me realize how pitiful cheating is. Basically, everyone, including staff and customers are victims of few individuals taking advantage of your insecurities and profiting. Because you cheat only if you are insecure.

Winner's account in case you want to report me: http://steamcommunity.com/id/theactualrizla/

Loser's account in case you want to laugh at him: http://steamcommunity.com/id/5763